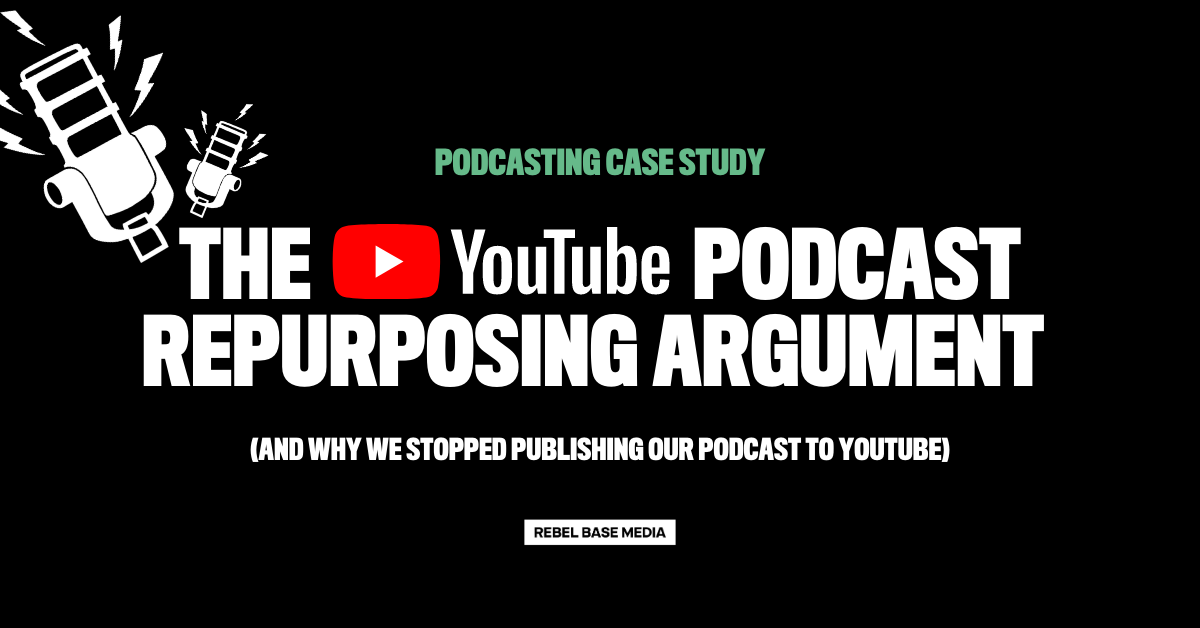 There’s a lot of debate about whether or not you should publish your podcast to YouTube.

Last year, we decided to run an experiment with my short-form podcast, The Podcast Accelerator to look at the specifics of what would happen if we did repurpose that show to our YouTube channel.

What we wanted to test

Before I tell you that, it’s important to know what our YouTube channel is intended to do:

Provide straight-talking podcasting education, tutorials and resources in a short, bite-sized format to 1. help podcasters and 2. grow our following and traffic.

So, we wanted to get into a regular publishing schedule with our channel and figured, like many podcasters do, that we already record an audio version so why not pop that on YouTube and “automatically” build the channel?

We’re experimenting with an auto-publish to YouTube feature for our podcast hosting platform, Captivate which we’ll probably release over the next couple of months.

So we figured, let’s see what happens if we take the audio, add a nice graphic and one of those fancy moving “audio waves” and automatically send the audio podcast to YouTube. So we did.

This was a pretty good way to get the back catalogue of The Podcast Accelerator over to YouTube, too.

Meh. Not much happened. Those videos didn’t and still don’t get many views at all.

We figured this might be down to YouTube’s rumoured “marking down” of videos with no actual video in them.

After all, YouTube is a video platform – it wants to give video to its users and for those users to be engaged with that video for as long as possible so that YouTube can serve some ads.

Our next experiment was to stick my ugly mug in front of a camera in the studio and, whilst recording the audio version, press “record” on the camera too and publish that video to YouTube.

We didn’t edit it and we left in the audio intro, the host-read ad for Captivate and AWeber and simply popped the video over to YouTube with minimum fuss.

We figured that this format might do a little better than the “repurposed” videos that were just audio with a graphic over them.

SOME of the videos performed a little better than the previous experiment but weighted against the time taken to sort the video version, it wasn’t worth it.

Plus, we really annoyed a small but vocal audience on YouTube who were miffed at the musical intro being left in and being a bit louder than they would have liked even when the audio listeners didn’t bat an eyelid at it.

Revisiting our experimentation we deconstructed the YouTube search listings a tad and looked at our goals for the channel.  One of the main ranking factors of any YouTube video is a quality, keyword-rich and specific video title.

So, we carried out the third experiment which was to record the videos as per the previous experiment but to tweak the way I delivered the audio to give us a point from which to edit the video, in such a way that the musical intro and the host-read ads weren’t included. In short: we got straight to the meat.

These videos began to get a few views but each video needed a different title to the audio version and of course, each YouTube title needed researching and each video setting up properly in YouTube. Sadly, this is still not worth the time it takes.

What we decided to do, after all that

It’s very clear that one, well researched and highly considered video made specifically for YouTube with purposeful marketing intent and with the goal of continuing to generate traffic & views long after publishing works better than “repurposing”.

Yes. But how and why you do so is dependent on your goals. We learned some clear lessons which shape how you podcast over on YouTube:

When considering adding YouTube to your podcasting mix, you have to look at your goals:

Want to build an audio-only business, brand or platform?

Then focus solely on audio. It’ll take longer to build the audience, but the audience will be more specific and focussed on that content.

Want to be everywhere for your business, where a podcast is just one piece of the marketing mix?

Repurposing to YouTube won’t build you a channel, but it will mop up stray content consumers who may stumble upon your content AND give you a channel with history if you ever do decide to focus on growing it.

So, if it makes you feel better to repurpose to YouTube, there’s nothing wrong with it but be realistic about how little it may help your YouTube channel to grow.

Want to build a media brand that stands the test of time with a big overall audience?

Then focus on each channel separately, doing the relevant research and work required for each platform.

Podcasters don’t like to hear that, especially when automatic “repurposing” exists and in a world where the biggest podcasters run multi-camera, well-edited setups and make it look easy to run both a podcast and a YouTube channel.

(Quick one: I just launched a new podcast launch crib sheet, all free, too. Check it out.)