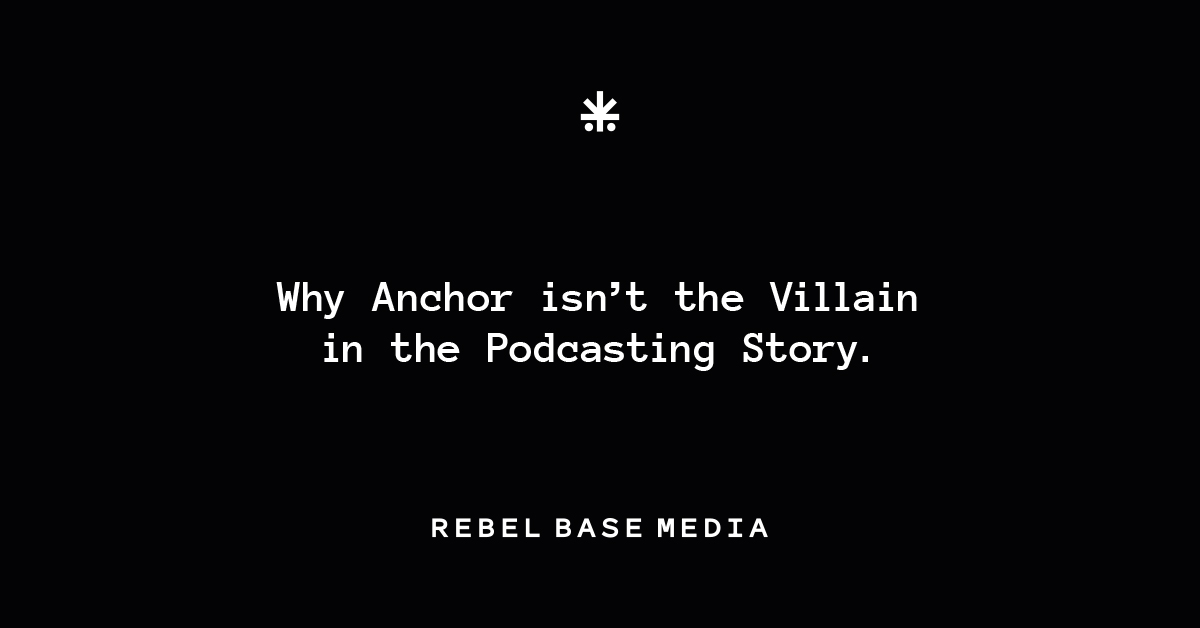 Why Anchor Isn’t the Villain in the Podcasting Story

I get it. I run a podcasting tech company. We have a web platform, a podcast hosting platform, an Academy, some kick-ass interaction tech and a design solution for podcasters.

Mike, Nir and the Anchor team – plus its investors – seem to be intent on creating a complete “all-in-one” solution for podcasters.

And I mean ALL in one.

Nothing is safe from them, not anything that any of us do. Heck, they just announced their sponsorships model last week – truly, Anchor is trying to become the only one-stop-shop that podcasters need.

“Commercial” podcasting companies like ourselves who have been in revenue from day one with no financial injection and especially those that aren’t venture capital funded (Anchor has raised $14.4m to date, which is NOT easy – fair play) tend to get a little snotty about funded businesses – and I understand why, but I think it’s time to stop getting worked up about it.

The reason is simple: no matter how much you tell a new podcaster “VC funded companies are a risk” or “If you’re not paying, YOU’RE the product”, the more you just wind YOURSELF up.

And the reason is simple: at that point in their journey, they simply do not care.

All they want to do is try podcasting and Anchor is getting them over that hurdle, easily.

The “podcast elite” like to say things like “You don’t need Anchor, you simply need to record and pop it on our hosting service and you’re done, so it’s just as easy.”

But those who say that are often missing the point: the perception is that it’s not as easy and frankly, even though it IS easy, it’s not AS easy and it requires more time than Anchor does, even if podcasting companies get a little defensive over that.

There’s always the risk of any VC funded startup going down – especially with the run rate that I anticipate Anchor has.

Furthermore, there’s ALWAYS a risk of free products burning through to their next bridging round or in Anchor’s case, a series B, C etc and sure, that’s YOUR data and YOUR content on the line.

Sure, I know all about the “do they or don’t they own your content” situation, too – Mike and the team recently spent some time trying to clarify it – but if you want free, you take some risks with your data, whatever that data is.

It definitely looks like Anchor is playing the game for an acquisition from someone like Apple, Spotify, Google and countless others or otherwise, at some point, they will have to monetize their offer.

Finally, there are countless ways to do that: sell the product by introducing pricing/freemium style models; accrue their shed loads of data and start to sell behavioral data similar to how Foursquare monetizes; ad insertion; revenue shares with podcasters on donations, sponsorships and more – keep ‘em coming, you’re not surprising anyone by listing another ten ways that Anchor COULD monetize.

But here’s the deal: the podcasting space is big enough for us all. For everyone.

The industry needs us all, and it needs us to keep pushing each other

I’ve founded and succeeded in markets in the past that have been super competitive: on-demand marketplaces, agencies, artificial intelligence and almost four years ago I entered podcasting as a tech owner.

But thankfully, I’ve always been of the opinion that all ships rise in a high tide.

That’s why I never see Libsyn, Blubrry, PodBean or the bazillion other hosting companies springing up as competitors – they’re just other options and giving a podcaster, or anyone, other options is a great thing – because we all get better and the industry benefits.

Case in point: we brought our first brand to the podcasting space in early 2015 with Podcast Websites and BOOOOOM, Blubrry suddenly started offering PowerPress Sites, Libsyn went on to acquire Pair Networks and even RadioPublic are beginning to get into the “podcast websites” game. No doubt Anchor will get involved more there, too.

It’s fine – it makes us better, it makes them better and ultimately YOU, the podcaster (and me, I podcast too, a lot!) benefit from a better industry.

Speaking of the industry – it’s changing, maturing, growing and evolving and as much as anyone can say they know it better than anyone else, all that each of us can do is our bit to make the whole podcasting space better for everyone.

Yes, there’s a risk that VC funded startups bring to the table and of course Anchor intends to do something with all of the data/people/content/ behavior that they’re accruing – and that’s alright!

Because podcasting IS growing and if Anchor makes it easy for my friend to record a show, learn the principles and begin to enjoy producing content that THEY love using a device that they already know how to use, RIGHT NOW – and they can do it out of curiosity whilst bored with Netflix in the background, why not?

If that friend then goes on to create a second or third show, or even take their original show to heights that they never thought possible, then they’ve learned, they’ve become enough of an expert in podcasting for themselves to be able to decide which combination of the multiple solutions in the marketplace will work for them.

That landscape will change, it always does.

New tools will emerge, In fact, they already are emerging to challenge Anchor and guess what? Everyone will benefit from that, too – because all ships rise in a high-tide.

It’s a real deep dive from Daniel, something that he does so well, into the perceived “seriousness” of a podcaster and the correlation between that “seriousness” and the podcast hosting companies that they use.

The data is superb, the analysis is well considered and Daniel’s interpretations I think are spot-on.

In summary: if someone invests in a paid-for podcast host, then they’re likely to be more committed and more likely to keep their podcast alive, active and publishing.

But this is where Anchor for now, serves our industry so well, and why a platform like Anchor is vital to our industry’s continued prosperity and growth: Anchor allows me to easily dabble.

Anchor allows me to decide, really quickly, if podcasting is for me or not.

Sure, there’re bones of contention with how their shows are submitted to Apple et al, but for a human being to be able to decide whether or not a podcast is for them, without any worrisome editing or fear of technology, then Anchor has rightfully claimed that crown.

Can you easily record a podcast with your own microphone, a bit of editing and then quickly push it up to a podcast media host, with some nice cover art and let Apple and the other directories approve it!

But to get to that point, you have to record a podcast with your own microphone, learn how to do that quick bit of editing, set up your podcast media host, design or commission some nice podcast cover art and learn how to submit it to Apple and the other directories.

How many people “dabbled” with YouTube, faded and then came back to it months or years later in a more “professional” manner?

It’s easy to sit on a podcasting soapbox and say “Here’s how it should be.” – but podcasting isn’t yours, nor is it mine, nor is it Anchor’s – it’s OURS.

Instead of focussing on Anchor and how Mike, Nir & co. are ‘dangerous’ to a podcaster, why don’t we all make sure that our own products and services are serving OUR audiences better than we ever thought possible? Then if and when the time comes, we have the chance to win the business of that podcaster looking to make decisions based on what’s right for them.

In fact, I’ll say it – why don’t we applaud the Anchor team for making us THINK bigger, better and brighter for podcasters who we are lucky enough to work with.

No one company has as built-in or gifted right to the business of a podcaster. Podcasting is growing and with it, the number of options available to a podcaster grows with it.

And that’s right, it’s fair and it’s making us all better.

I love the industry – and although I may not be able to wear the badge of “being in podcasting since 2005”, you’d better believe that I live it and breathe it since falling in love with it in late 2013. Just like any great love story, each party must grow and develop rather than look backwards at how things were.

This isn’t me being controversial, even though some will take it as such.

For every “I agree with this article”, there’ll be a “yes but…” – but guess what, that’s fine too because it’s the breadth of opinions and depth of experience in the industry that is driving it forward.

And it’s uncomfortable, but whilst ever we’re all growing, then we’re doing better by the people who rely upon us.

That’s where we should be focused and if we take umbrage at anything that startups like Anchor do, then why don’t we all grab a beer and talk it out.